When it comes to toughing it out, English adventurer Rob Lilwall knows a thing or two.

In fact, Rob has just come from surfing the gentle waves of Kuta beach during some downtime in Bali.

As a prized Hong Kong-based motivational speaker, Rob draws on his wild on-road experiences from any number of his cycling adventures.

To be sure, this man has done some outlandish touring including cycling with from Siberia to England, which racked up 30,000 miles, yes, miles. He has walked home to the busy islands of Hong Kong from Mongolia and cycled across the USA.

He hitched rides on yachts and cargo ships to cross the pirate-infested water. Though given his raw honesty, genuine humility and laid back charm, he probably could have walked on it.

“I’m not tough or brave. I just approach my goals with a mindset that makes it work. It is all calculated risks that are applied to extreme situations. The start of my first trip was full of fears both real and imagined, which wasn’t helped by the natural disposition of Russians who warned us that we would be eaten by bears or murdered by bandits,” says Rob.

Even that other bear of an adventurer Bear Grylls doffs his cap to Rob’s expeditions and courage.

It did not take long before National Geographic spotted his talent and secured the series Cycling Home From Siberia where Rob takes a three-year journey without a support crew through Australia’s notorious Nullarbor Plain to the dizzying altitudes and icy passes of Tibet and Nepal – where he viewed Mt Everest – and the lonely roads of Afghanistan.

“That trip was physically hard. My bike was fully packed with camera gear and everything that I needed. It was exhausting and difficult. I even had to film myself, which made is also slow going getting off the bike to set up the camera, get back on and ride past, then go back and get the camera,” he says. 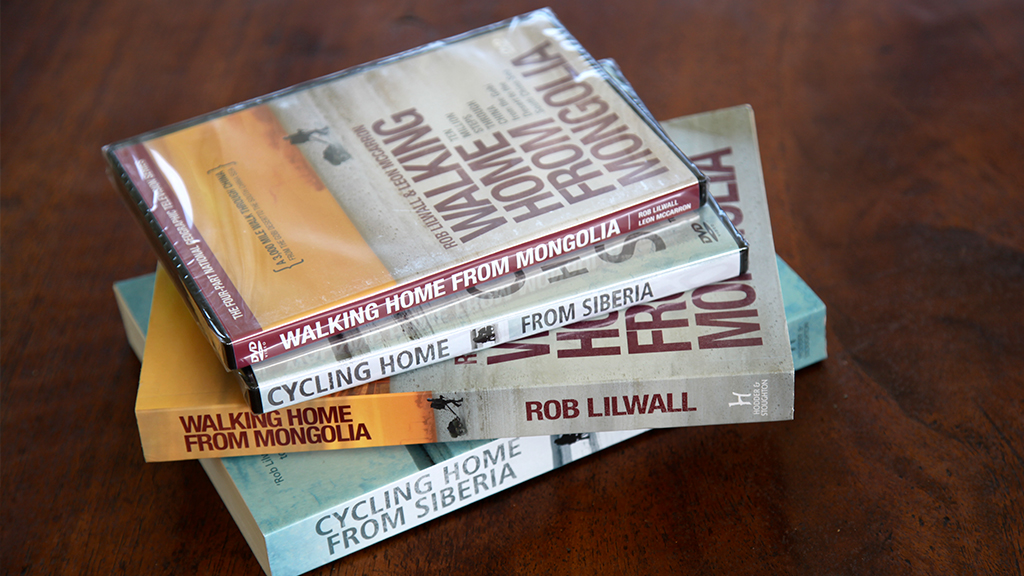 He has since finished a second series for National Geographic called ‘Walking Home From Mongolia‘. Both titles are also are print edition books are riveting reading and make you want to get on your bike and get going.

More recently Rob and his wife Christine rode from LA to New York and camped along the way.

“It was a bit tricky because Christine grew up in Hong Kong and is a real city girl and she had only ever spent two nights in a tent before. We had a great time on this trip because we had a more relaxed schedule than anything else I have done,” he says.

Now Rob shares his awesome stories of goal setting, blind will and dedication with the corporate world as a motivational speaker where he gets to travel the world however nowadays in much greater comfort than a narrow bike saddle and heavily packed panniers.

“I feel that I have trained for public speaking through my early profession as a high school geography teacher. When I am addressing a conference I try to make my adventure experiences exciting while also pertaining to my audience’s life, particularly when it comes to setting goals. This starts with just getting through the day through to more long-term aims,” he says.

Before Rob finished University, he spent some time in the United State working as a door-to-door salesman – a career that he still draws inspiration from.

“That job taught me many life lessons. I was so bad at it and my manager sat me down and told me that the answer to all of my problems was behind the next door. Now I have adapted that to being the next 50 kilometres,” he says.

Bali for Rob is a great getaway from a busy life. “It really is just a beautiful place. I can’t see any reason why I would get on a bike and start touring around the island when I can just go surfing,” he says.

While Rob chose surfing over cycling around the island, you could do both! Book your private villa and ask our Concierge team to arrange your holiday. All you have to do is enjoy Bali!