During the ninth lunar month of the Chinese calendar, the Phuket Vegetarian Festival (or jia chai in local Hokkien Chinese dialect) is held. The colourful event celebrates the Chinese community’s belief that abstinence from meat, sex and alcohol and merit making at the many Chinese shrines and temples throughout the seven to ten-day festival, will cleanse the body, mind, and spirit.

The Phuket Vegetarian Festival can be, hold on, IS a rather gruesome, crazy and loud experience, but saying all that, it is one of the most interesting, colourful, amazing and yes gruesome and loudest festivals I have ever seen.

not recommended for the faint-hearted

If the festival is on your bucket list, the finale in Phuket town is the part you cannot miss, but make sure you take earplugs and a mask, oh yes and perhaps a few drinks.

It is believed that in 1825 when Phuket was the tin mining capital of Asia, a wandering Chinese opera group, who were performing on the island to entertaining the tin miners of whom a large percentage where Chinese, fell ill with malaria. The opera group decided to adhere to a strict vegetarian diet and also pray to the Nine Emperor Gods, which they believed would purify their mind and body.

As with many stories, this one has a happy ending, and the opera group made a complete recovery, which lead to everyone celebrating the fact they had survived what was and still is a fatal illness, and a festival was held to honor the gods.

Phuket Vegetarian Festival, October 2007. I had never encountered anything like this before and, although I had done some research and knew a little bit of what to expect, I was so wrong. On the first day, the whole island seemed to be waiting for the sun to go down so that the ceremonies could start, the anticipation was like a haze over Phuket. Everyone dressed in white, the official colour for everyone to wear. I knew that each night there would be these ceremonies at all the Chinese temples around Phuket, and the ceremonies included fire walking and climbing sword ladders. I also knew that some people would become mediums for the gods, and these men and women would pierce their cheeks with metal spikes, which were like long metal kebab sticks. 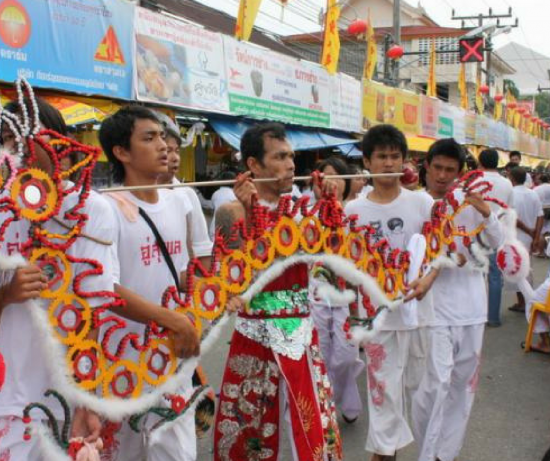 Mutilation through piercings and cuts is a gruesome aspect of the tradition, which, is said to bring good luck through suffering.

I got to experience many processions around the whole island, which seemed to happen as and when, without much warning and if you were unlucky enough to be on the road as the procession started, then you were not going anywhere for a while. The mediums, with their cheeks pierced, would walk flanked by their followers while shaking their heads as if they are possessed, and maybe they were. Not one of the mediums that I remember seemed fazed by the number of Chinese firecrackers that were going off around them and the banging of the drums.

During the festival fireworks and drums are a constant day and night. The noise, louder the better, is to drive away the evil spirits. Remember the tip at the start? Earplugs…

Then there was the food. Now I am not a vegetarian, in fact far from it, but I enjoy food and was excited to try some of the amazing vegetarian street food that lined the streets of Phuket. Roads which used to be two lines were halved due to the number of food stalls that had been set up, and the yellow flags that fluttered above each food stall stood out in contrast to the red Chinese lanterns that hung across the streets, everything looked so inviting, the vibrant colours the happy smiling faces.

The food, well if your idea of amazing vegetarian food that will cleanse your soul and body is deep-fried tofu or deep-fried vegetables, both soaking in oil, then the food was perfect. It was, in my mind rather disappointing. I had only lived in Phuket for a few months and had been enjoying the amazing Thai street food, which in my opinion is the best street food in the world, and was expecting something stunning and scrumptious and of course healthy. Maybe it was my expectations or maybe I just went the wrong stalls, but the food, well let’s just say I didn’t follow the seven days of being a vegetarian. 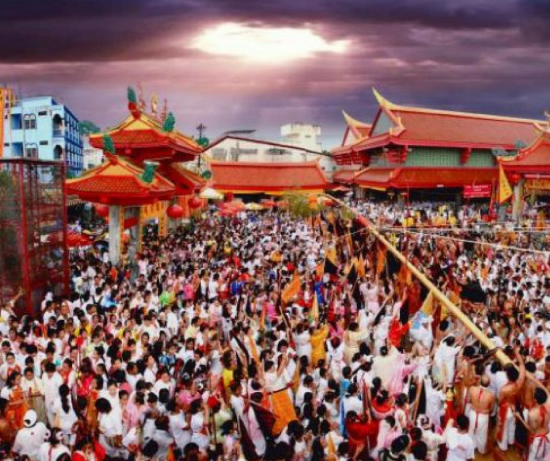 At the end of the seven days, the mediums and their followers all head to one of the biggest Chinese temples in Phuket town where procession begin early in the morning. Festivities continue throughout the day, but the most impressive is the final procession in the evening, and this is the bit that you have to experience. Thousands of locals, tourists, men, women, and children line the streets to watch the mediums and the followers all take the final walk to Saphan Hin, where the mediums will then come out of there trance state and it is the final farewell to the Nine Emperor Gods.

Everyone and I mean everyone, is throwing Chinese firecrackers and the noise and smoke is overwhelming, hence again why I mention earplugs and masks. It is a true spectacle and something that I will never forget. My clothes, the roads, parked cars, in fact, everything was covered in red paper from the firecrackers. It was unbelievable and something that you have to experience.

As like all festivals, things change over the years, and some might say become more spectacular, but for me, the Phuket Vegetarian Festival may, and I use that term loosely, be going too far. Only 10 years ago it was metal kebab stick that both men and women would pierce their cheeks with, but this has changed and each year the mediums seem to be trying to outdo each other with a variety of weird items that are being used.

Over the past few years, there have been swords and knives, guns and even a bicycle all used when the mediums piece their cheeks. In 2016 I even saw someone with a sun umbrella through their cheek and part of a motorbike. This is definitely not recommended for the faint-hearted to witness. There is also the indiscriminate use of the Chinese firecrackers, and you need to be very aware of this as over the years some injuries have come from firecrackers.

So I guess what I am trying to say is don’t go to the Phuket Vegetarian Festival, but if you are like my children who don’t listen to me when I say things like, “don’t eat that sweet that just dropped on the floor”, then go and enjoy this truly amazing festival. Take ear plugs, take a mask, take your own drinks and enjoy the craziness.

This year’s Phuket Vegetarian Festival is to be held at participating Chinese shrines across the island from October 20-28.

Due to the passing of the late King Bhumibol Adulyadej and the funeral that will be happening during the Phuket Vegetarian Festival, there are some restrictions put into place for this year’s festival. According to Phuket Gazette, processions are to take place only on the last day of the festival this year, but take it from me – the festival has already begun as usual.