“I drink to make other people more interesting.”

Vodka is traditionally distilled from fermented grains or potatoes and the word Vodka is derived from the Slavic word voda, meaning, water. It is believed that the word vodka was recorded for the first time in 1405 in Akta Grodzkie, Poland. At the time the word wódka referred to medicines and cosmetic products, which does make some sense as my Nan always used to have a little bit of vodka in the evening and told everyone it was her medicine.

Vodka has been the drink of choice for many of the Baltic countries, or what is known as the Vodka Belt. The general definition tends to include the following states as significant producers and consumers of vodka: Russia, Belarus, Poland, Ukraine, Lithuania, Latvia, Estonia, Sweden, Norway, Finland, and Iceland. 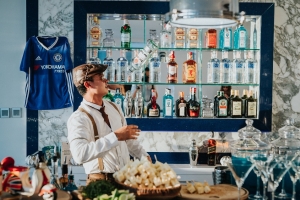 There are a variety of different vodkas available in Phuket, Thailand from your classic brands to new flavored bottles, from reasonable priced bottles to bottles that come with their own fireworks and entourage when you order them. Most of the Phuket beach clubs have a selection to choose from depending on your taste and budget.

Stolichnaya Vodka
The origins of the original premium vodka go way back to the beginning of the 20th century in Russia. Also known as Stoli, it’s a vodka made of wheat and rye grain.

Belvedere
Belvedere is a brand of Polish rye vodka. Production began in 1993 at the facility located at Polmos Żyrardów, Poland.

Beluga
Beluga made its first appearance in 2009, and has gained a reputation for exceptionally clean, pure vodka. Its distillery is located in the heart of Siberia.

Grey Goose
The French vodka that took the spirit to new heights of popularity. Made from the same winter wheat that goes into a croissant, this is the vodka everyone wants to be seen with.

Smirnoff
One of the best-known global drinks brands, Smirnoff dominates the vodka market. As well as the classic red (No. 21), blue and black bottles, the brand has added a range of flavored vodkas to its line-up in recent years.

Absolut
One of the best-known vodkas in the world, Absolut is produced near Åhus in southern Sweden.

END_OF_DOCUMENT_TOKEN_TO_BE_REPLACED

There are hundreds of Chinese restaurants in Bali, Indonesia. These top five are award-winning establishments robust enough to host your Chinese New Year gathering and tasty enough to surpass expectations of the most discerning foodies from around the world.

Named Best Chinese Restaurant in Bali by NOW! Bali Magazine in 2017 with 720 votes is Ah Yat (there are several restaurants by the same name in this chain, including renowned locations in Jakarta, Indonesia and Singapore). Executive Chef Cheung Kin Kau boasts over 20 years’ experience in fine dining. The menu is both adventurous and traditional – expect Japanese food, Hokkien food and Chinese food that demonstrates the chef’s Cantonese heritage.

The beautiful restaurant hosts massive saltwater tanks of live seafood, so fresh fish dishes and shellfish are centre stage. This large restaurant is the only place in Bali with a selection of Japanese special grade dried abalone and Greenlip abalone. A dim sum lover’s delight, there are 30 types of Hong Kong style steamed dumplings on the menu too.

Executive Chef Daine Gilbert has a buffet of delights from China,

END_OF_DOCUMENT_TOKEN_TO_BE_REPLACED

While the Thai capital of Bangkok is a globally recognised dining destination that’s on the verge of getting its own Michelin star guide, Phuket is no slouch when it comes to delicious and daring food either. The island’s rich culinary heritage can be traced back to the diverse tastes that flourished from the waves of migrant arrivals from across Asia in days past to its current status as one of the top resort islands in Asia.

Some truly talented chefs from Thailand and around the world have added their own creative flavours, colour and panache to the Phuket dining scene. Be sure to try some of these standout dishes at Phuket’s best restaurants if you haven’t already!

The idea behind every dish and drink at Bampot is to take local ingredients and apply the best technique for each ingredient, whether Thai or Western style, and pair complementing flavours and textures to end up with a balanced finished dish.

Bampot is Scottish Chef Jamie’s first solo venture following a career in top kitchens in the UK and Asia.

With its meticulously presented dishes and unpretentious style, Bampot has become a foodie favourite since it opened near Bang Tao Beach.

Stepping into Suay restaurant in Phuket Town is like entering the home of a friend, with its low-key and welcoming style providing a subtle backdrop to the sensational fusion food that’s about to be served.

Created by Chef Tammasak Chootong, known by many as Chef Noi, Suay means “beautiful” in Thai and his dishes have earned him renown not only for beautiful presentation but for his bold and sassy balance of flavours.

END_OF_DOCUMENT_TOKEN_TO_BE_REPLACED

Its easy to be seduced by the glamour of southern Bali with its trendy restaurants and uber-cool beach clubs, but if you have something a little quieter in mind for your Bali holiday, the pristine Sunrise Coast on the island’s eastern shores has a charm all its own. 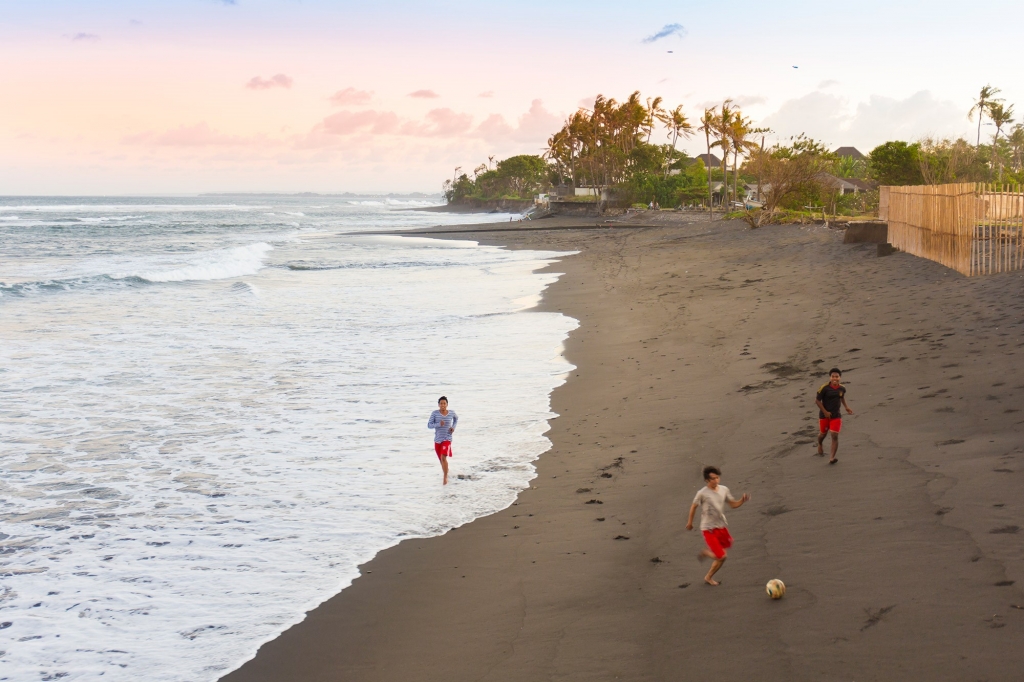 Peaceful coastal villages nestle amidst banana plantations, lush green rice fields and exotic palm-fringed black sand beaches. A trio of volcanos looming in the distance make the most stunning of backdrops, especially when bathed in the pearly pink light of a Bali sunrise.

TOP THINGS TO DO

The atmospheric seaside town of Candidasa is situated mid-way up the east coast just 60km from the airport. Local art shops sell paintings, handicrafts and wood carvings, while casual open-air restaurants are strung along the shore, some with candle-lit tables right on the beach. Make sure to check out the main temple with a dreamy location on the edge of a lotus-filled lagoon.

Adventure-seekers can trek to the top of Mount Agung – the island’s highest peak, while water enthusiasts can explore Bali’s best dive sites, such as the HMS Liberty Wreck. Adrenalin junkies can get their kicks on a shark dive, or glide through the water with manta rays. The cool waters of Tirta Gangga, an elaborate water palace tucked into the nearby hills, makes a gentler respite with its spring fed pools and water fountains carved from stone.

A few kilometers inland from Candidasa, the 700-year-old walled village of Tenganan is home to the Bali Aga, the island’s first inhabitants. It is quite a cultural attraction these days, but still provides a fascinating glimpse into a traditional way of life and is justly famed for its beautiful ikat weavings.

The small coastal village of Jasri is home to Charly’s chocolate factory. You won’t find Willy Wonka, but you will find delicious chocolate (try the Narkabo dark chocolate nibbles) and great photo opportunities thanks to a quirky assortment of cone-shaped bamboo houses clustered in a grove of coconut palms right on the beach. Nearby, a bumpy dirt road winds through verdant forest to emerge at Pasir Putih (white sand) rightly crowned as Bali’s most beautiful beach. Bathe in the turquoise sea, soak up the rays from a deckchair and indulge in fresh fish for lunch, barbecued right in front of you.

END_OF_DOCUMENT_TOKEN_TO_BE_REPLACED

Sri Lankan cuisine isn’t particularly well known on the international stage. Although it is often misunderstood or taken to be an extension of Indian food, it is a very unique cuisine. For many who do visit Sri Lanka it’s love at first taste!

Almost any fruit or vegetable can be used to make a curry or an accompanying dish such as a sambol (usually hot and fiery), mallung (shredded greens), or chutney, and a typical meal includes a meat or fish dish, a few vegetable dishes and a lentil curry (dhal). Coconut milk is used in some curries to add creaminess while others are left ‘dry’, and the result is a really healthy balanced cuisine. 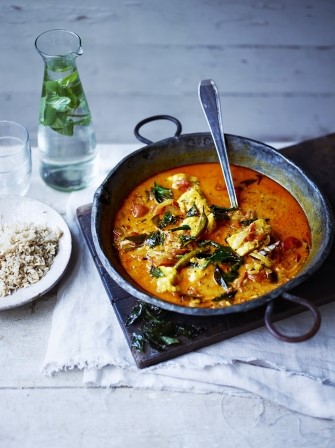 Rice and curry is typically eaten for lunch whereas hoppers and string hoppers are often on breakfast and dinner menus, usually served with a fish and/or dhal curry, a fiery kata sambol (tomato, onion and dried chilli) or a sweet onion relish. Sri Lankans aren’t big on desserts, and usually end a meal with fresh tropical fruit, ice cream or an adopted Malay crème caramel-like dish, watalappan.

Sri Lankan New Year takes place in April, and this is a time of celebration for the island’s Buddhists and Hindus who prepare special sweets and sweetmeats for sharing. Thanks to the island’s Muslims, biryani is another popular ‘borrowed’ dish as is fried rice or fried noodles, a favourite quasi-Chinese dish adapted by the Sri Lankans that you’ll see in many guises on numerous restaurant menus.

You’ll be able to try an endless number of delicious Sri Lankan curries when you book a stay at one of our villas in Sri Lanka. The villas come with a full complement of staff, including a chef or a cook, and they can introduce you to the flavours of Sri Lankan cuisine. They will also be happy to teach you how to make your favourite dishes for recreating with your friends and family back home.