“I drink to make other people more interesting.”

Vodka is traditionally distilled from fermented grains or potatoes and the word Vodka is derived from the Slavic word voda, meaning, water. It is believed that the word vodka was recorded for the first time in 1405 in Akta Grodzkie, Poland. At the time the word wódka referred to medicines and cosmetic products, which does make some sense as my Nan always used to have a little bit of vodka in the evening and told everyone it was her medicine.

Vodka has been the drink of choice for many of the Baltic countries, or what is known as the Vodka Belt. The general definition tends to include the following states as significant producers and consumers of vodka: Russia, Belarus, Poland, Ukraine, Lithuania, Latvia, Estonia, Sweden, Norway, Finland, and Iceland.

There are a variety of different vodkas available in Phuket, Thailand from your classic brands to new flavored bottles, from reasonable priced bottles to bottles that come with their own fireworks and entourage when you order them. Most of the Phuket beach clubs have a selection to choose from depending on your taste and budget.

Stolichnaya Vodka
The origins of the original premium vodka go way back to the beginning of the 20th century in Russia. Also known as Stoli, it’s a vodka made of wheat and rye grain.

Belvedere
Belvedere is a brand of Polish rye vodka. Production began in 1993 at the facility located at Polmos Żyrardów, Poland.

Beluga
Beluga made its first appearance in 2009, and has gained a reputation for exceptionally clean, pure vodka. Its distillery is located in the heart of Siberia.

Grey Goose
The French vodka that took the spirit to new heights of popularity. Made from the same winter wheat that goes into a croissant, this is the vodka everyone wants to be seen with.

Smirnoff
One of the best-known global drinks brands, Smirnoff dominates the vodka market. As well as the classic red (No. 21), blue and black bottles, the brand has added a range of flavored vodkas to its line-up in recent years.

Absolut
One of the best-known vodkas in the world, Absolut is produced near Åhus in southern Sweden. Founded by Lars Olsson Smith in 1879, the company has grown from a plucky competitor to the large Stockholm-based producers to be the largest distiller in the country.

Ketel One
Ketel One Vodka is made at a distillery established by Joannes Nolet in Schiedam in the Netherlands in 1691. First exported in 1983, the range has grown to include Citroen and Orange flavored variants.

Ciroc
Ciroc helped to modernize the world of vodka by taking it out of its eastern European heartland, relocating it to France and using grapes – rather than potatoes or cereals – to make it. 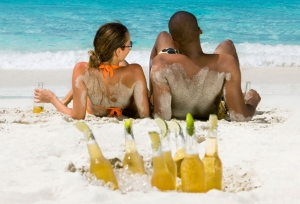 Since the 2015 coup the beach club scene in Phuket has changed drastically with venues such as the iconic Catch Beach Club on Surin Beach being completely knocked down, and moved to Bang Tao Beach, which is the next beach to the north. Surin Beach had been the place to be seen since 2007. Between 2013 and 2015 everyone was opening a beach club, before the coup there was 6 beach clubs on Surin Beach which is only 1.5km long.

Now it’s the time of the beach’s either side of Surin and further afield to throw their sand on the towel to see who will become the new hip and happening hang out.

HQ Beach Lounge Phuket is a very chic and stylish lounge style beach club at the northern end of Kamala Beach. Modest in size, it has an impressive selection of drinks and classy cuisine in a cool, laid-back setting. It managed the same team behind the Twinpalms Phuket resort, as well as Catch Beach Club and Palm Seaside in Bangtao Beach, with the same level of luxury throughout.

Café del Mar Phuket is a classy beach club from the world-famous brand originating out of Ibiza. Opened in 2017, it brings the sophisticated party atmosphere to the northern end of Kamala Beach, with a high-quality setting and a great soundtrack of chill-out beats.

Catch Beach Club in Bangtao is a favorite hang-out spot out for many local residents and regular visitors to Phuket. It’s a great place for everyone, including families with young kids. There is a swimming pool and some good options for water sports on top of their delicious food, good cocktails and a fantastic wine list.

Dream Beach Club is a stylish, laid-back place to relax and party right on Layan Beach. Part of the world-renowned Dream brand from New York City, and is right next to the sand and is one of the largest beach clubs in Thailand, featuring two swimming pools, four bars and over 100 sun loungers and day beds.

The new kid on the block, Baba Beach Club Phuket is set on Natai beach with 200 meters of beachfront. The decor draws inspiration from the iconic Chino Portuguese style of Phuket, combined with the vivid colour palette of Shanghai Tang to create an innovative “Chino Portuguese Tang” vibe. Due to its location it is less busy than the others, yet this will change as there are big plans for a hotel and residences to be built in the future.

Just a little word of warning from a young father who is now starting to sound like his old father, having a drink while on holiday is great, have fun but please drink responsibly. 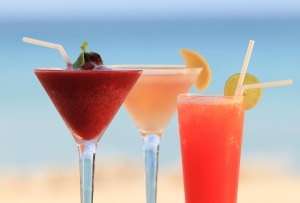 Chill the glasses in the fridge for about an hour before making the cocktail. Fill two chilled highball glasses with ice cubes. Pour vodka, peach schnapps and lemon juice in cocktail shaker and shake well or pour into a jug and stir well. Divide between the two glasses.

Top up each glass with equal measures of cranberry and orange juice. Add a slice of lemon and a cherry to each glass and serve decorated with fresh mint sprigs.

Recipe from Good to Know UK

Keep all ingredients in the fridge for a few hours. Shake with 5-6 ice cubes and sieve into a cocktail glass. Enjoy.

COST OF VODKA IN PHUKET

Prices for vodka at the beach clubs are all similar, although you will likely be paying more than in your home country due to Thai import tax.

Now if you’re feeling flush then you could always go for the 6-liter bottle of Belvedere which is only 39,000 THB or $1199 USD, but you are not only getting 6 liters of vodka, oh no, as this is the one that also comes with free sparklers and an entourage.