A Guide to Japan in Autumn

Although cherry blossoms’ fleeting springtime arrival is regarded as Japan‘s most famous seasonal event, in recent times, the nation’s autumn months — known as ‘koyo’ 紅葉 in Japanese — have long been a celebrated occasion here, and it’s gaining attention overseas too. Cool temperate climates, long sunny days, traditional festivals, and ample opportunities to get out of the cities and enjoy the nation’s more natural side, autumn is an excellent time to visit. Here’s a run-down of what you need to know.

The timing of the turn of the autumn leaves dramatically depends on location. Also, like the arrival of cherry blossoms, it can greatly vary from year to year. Up north where it’s cooler, like in Hokkaido, the colours typically transform in late October, while in the middle of the country like Nagano, near Mt. Fuji and in Nagoya, it’s typically peak season around mid-late November. Heading further down to the warmer south, like Wakayama and Fukuoka, early December is currently predicted to be when the leaves peak.

The most iconic places to see autumn leaves

Throughout Japan, there are countless spectacular destinations to admire the changing fall colours. But of course, there are a couple of highlights, depending on when you’re planning to visit.

Daisetsuzan National Park, Hokkaido: If you’re in the country for an early ‘koyo’ celebration, then up north in Hokkaido is the best place to be. Daisetsuzan is Hokkaido’s largest national park and is home to plenty of unspoiled wilderness that can be admired throughout the year, but is especially stunning in October when many of the park’s trees start to transform into fiery shades of red and gold.

Rikugien, Tokyo: If you want to witness some natural beauty in one of the world’s busiest, most populated cities, then make your way to the pristine Rikugien Garden in Tokyo. This well-maintained strolling garden is generally regarded as one of the best autumn spots in the country. During the peak season, the trees are even illuminated so guests can enjoy some evening leaf-admiring. 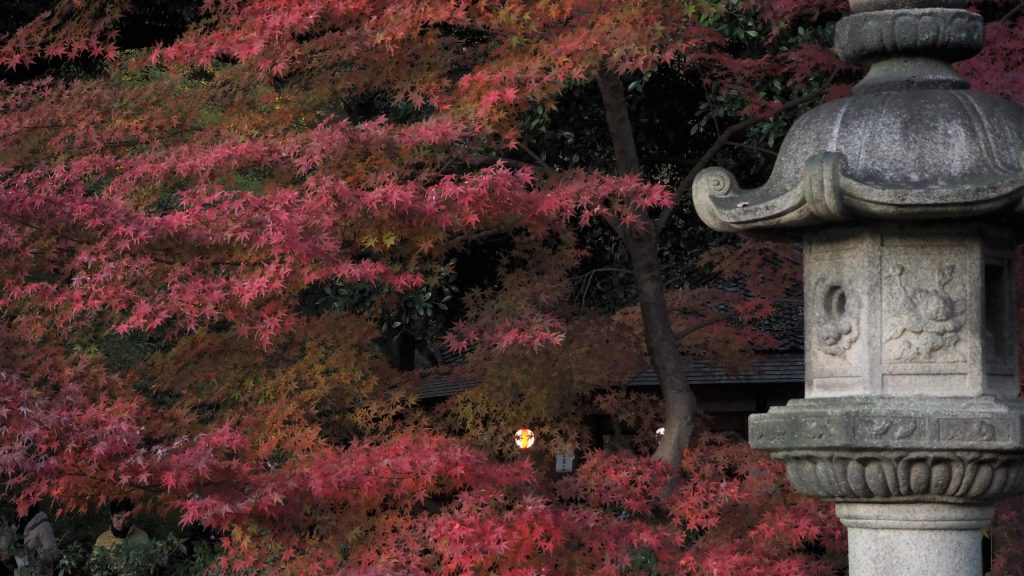 Arashiyama, Kyoto: A popular place for guests all year round, Arashiyama is especially stunning in autumn as the hillsides come alive in eye-catching shades of red, orange, and gold. With plenty of traditional sites as well as being home to the iconic bamboo garden, there’s no excuse not to visit.

Nikko, Tochigi: An easy overnight trip from Tokyo, Nikko is a picturesque corner of Tochigi prefecture known for its lavish temples and rugged natural surroundings, which in autumn are just all that more beautiful. Thanks to its mountainous location, the colour change typically arrives in October a little earlier than most, so it pays to be prepared! 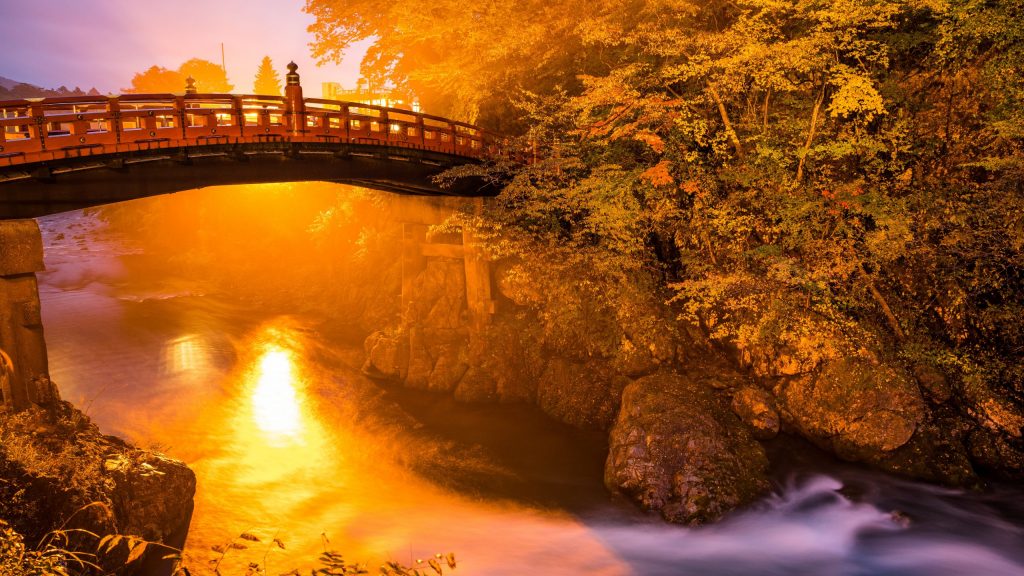 As a nation that loves to celebrate the transforming seasons, autumn is one of the best times to catch some of the county’s most exciting traditional festivals and events. It’s a time of celebration not just of natural beauty, but of rich, abundant harvests that traditionally locals relied on to survive the harsher winter months.

The Nagasaki Kunchi Festival is one of the most famous autumn celebrations in the country. Initially founded over 400 years ago, this festival is held in early October and is hosted throughout the city of Nagasaki. It features plenty of live entertainment, including the popular Jaoidori dragon dance, which was greatly inspired by Chinese culture.

In Kyoto, they celebrate the Jidai Matsuri, an event typically regarded as one of the city’s most significant festivals. It has origins stemming from Heian period year of 781. The event is a colourful parade comprised of folks dressed in authentic traditional garb who make their way from Imperial Palace to Heian Jingu (shrine).

In Fukushima, the Nihonmatsu Lantern Festival is held Saturday, Sunday, and Monday throughout the month of October and is a spectacular sight to be seen. The celebration features large lantern-covered floats filled with taiko drummers and performers who fill the streets with music and illumination en-route to Nihonmatsu Shrine. 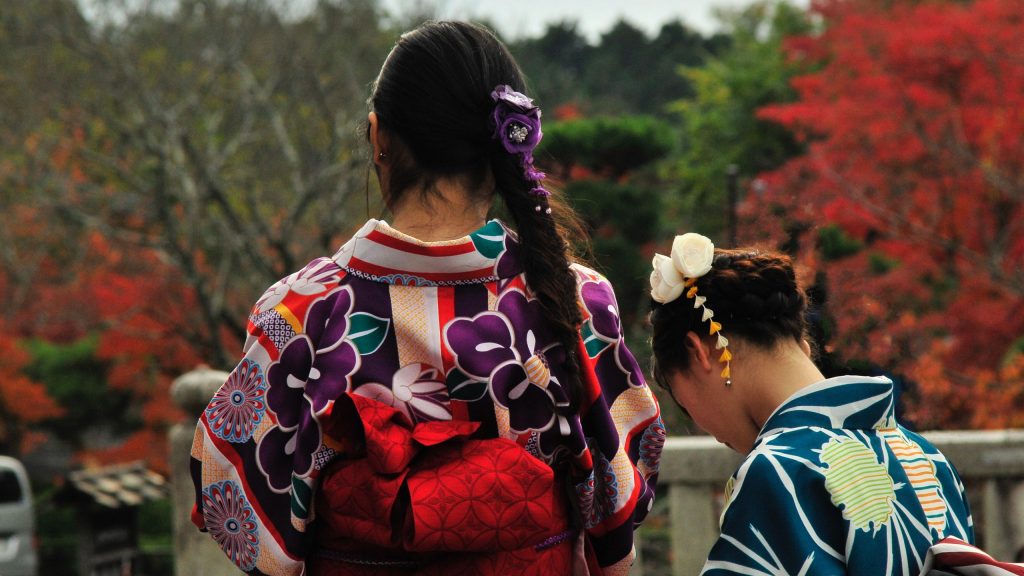 Seasonal food is a big deal in Japan, but when it comes to autumn cuisine, it looks quite different from the US’ pumpkin spice love affair.

Oden is one hearty cool-weather dish; it’s a clear dashi-based stew-like dish featuring eggs, fish cakes, meatballs and hearty chunks of vegetables like daikon (Japanese radish) and cabbage rolls. The greatest thing about oden is its versatility, the soup may be the same (a mild savoury base), but you can add your favourite additions and easily bypass the things you don’t want to eat!

Known as pacific saury outside of Japan, ‘sanma’ is an incredibly popular fish that peaks in fall. Light to taste and small enough to snack on, ‘sanma’ are typically enjoyed very simply grilled over an open flame with a little soy sauce to bring out the flavor.

If you’re looking for something a little sweeter, the chestnuts (known as kuri), and grilled Japanese sweet potato (known as ‘yaki imo’) are two treats you can’t miss. They’re ubiquitous in autumn, enjoyed in a range of sweets and desserts, and of course on their own.

Discover Japan in autumn and know why koyo is a celebrated season. Complete your experience by booking one of our private Niseko chalets.