Festivals provide an interesting peek into the local culture, and Phuket’s Vegetarian Festival is no exception. Also known as Nine Emperor God Festival or Jia Chai, it falls in the ninth lunar month of the Chinese calendar. Thailand and exoticism go hand-in-hand, and this Taoist festival is celebrated with great zeal. Each shrine is extensively cleaned, in anticipation of the festival and giant Go Teng poles are raised on the first day (to be lowered after the last) symbolically to allow the Jade Emperor and other Nine Emperors to come down from the heavens and walk the earth again.

The story goes back to 1825 when Phuket was the tin mining capital of Asia. A wandering Chinese opera group who were performing on the island to entertain tin miners fell ill with malaria. As part of their treatment, the opera group decided to adhere to a strict vegetarian diet and fervently prayed to the Nine Emperor Gods to purify their mind and body.

As with many folk tales, this one too has a happy ending. The opera group made a complete recovery which led to everyone celebrating the fact they had survived what was at that time a fatal illness, and a festival was held to honour the gods.

Rules of the Festival

The name may have you believing that it is a food festival showcasing vegetarian delights. Though the streets are lined on both sides with hawkers selling vegetarian fare, it is not the highlight of the festival. Instead, it marks a period where devotees are expected to follow ten strict rules, and observe abstainance from meat, alcohol, sex, and other stimulants. The locals believe that following these rules allows them to achieve a greater level of spirituality, and is a way of honouring the gods.

However, the festival is not celebrated behind closed doors. Like many things Thai, this too is a boisterous public celebration, and one not for the faint-hearted. The Vegetarian Festival in Phuket involves processions wherein devotees perform self mutilation and all other kinds of torture on themselves to shift ill-luck and evil from other worshipers onto themselves. They believe that by doing so, they can bring good luck to the community. 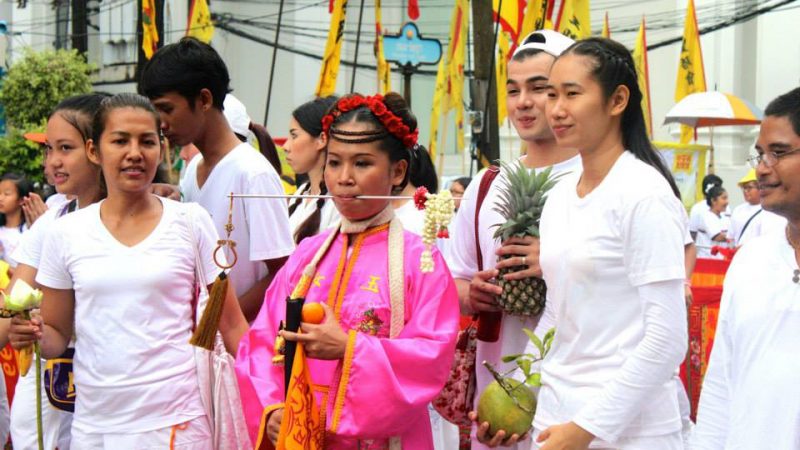 Expect vibrant and chaotic processions, with firecrackers being thrown around, lion dances, and coal-walking. You may find people with their cheeks pierced with spears, knives and other paraphernalia. Though it may seem bizarre and even scary to some, and the shutterbugs click away relentlessly, this is not a tourism propaganda. The festival has been celebrated by locals for more than two centuries and each mutilation is their way of sacrificing for the good of the general community.

Sounds unreal, doesn’t it? See the Vegetarian Festival for yourself to tick it off your bucket list and get a glimpse into the ritualistic side of Phuket by planning a trip during the festival dates.