Attending a cremation is unlikely to be top of the ‘must-do’ list for the average vacationer. But then Bali is far from an average holiday destination.  As anyone who ventures a few kilometres from the main tourist beaches will discover, this really is the ‘Island of 1,000 temples’ – an understatement if ever there was one. The fabled sea temples of Uluwatu and Tanah Lot, the mother temple of Besakih on the slopes of the sacred Gunung Agung, and the oft-photographed Ulun Danu Bratan temple feature on many a day-trip itinerary. And driving through traditional villages and across swathes of rice terraces can bring many unexpected sights as you come across small temple festival and colourful processions.

Visitors to Bali’s cultural heart in early March found themselves in the right place at the right time to witness something spectacular: the cremation of Anak Agung Niang Agung, the wife of Tjokorda Gde Agung Sukawati (1910-1978), widely known as ‘the King of Ubud.’ 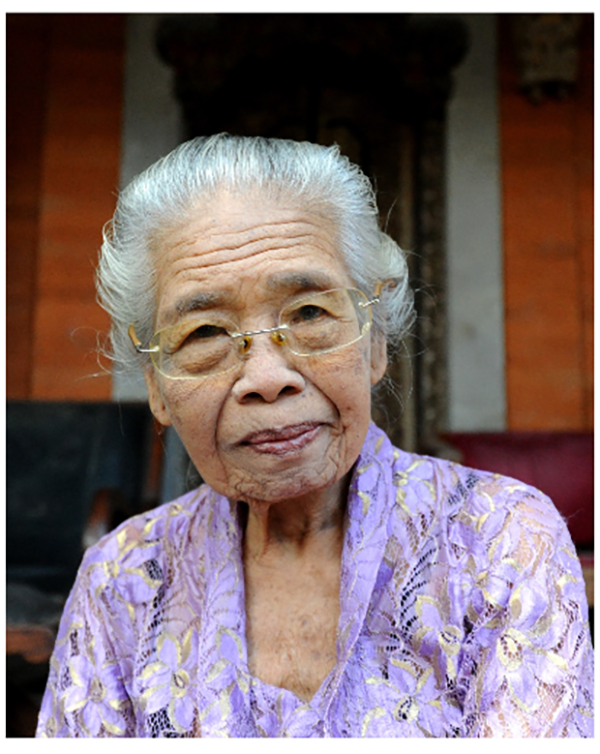 “Strange as it seems, it is in their cremation ceremonies that the Balinese have their greatest fun. Cremation is an occasion for gaiety and not for mourning since it represents the accomplishment of their most sacred duty: the ceremonial burning of the corpses of the dead to liberate their souls so that they may thus attain the higher worlds and be free for reincarnation into better beings”. The words of Mexican artist Miguel Covarrubias ring as true today as when he wrote his Island of Bali book in the 1930s. 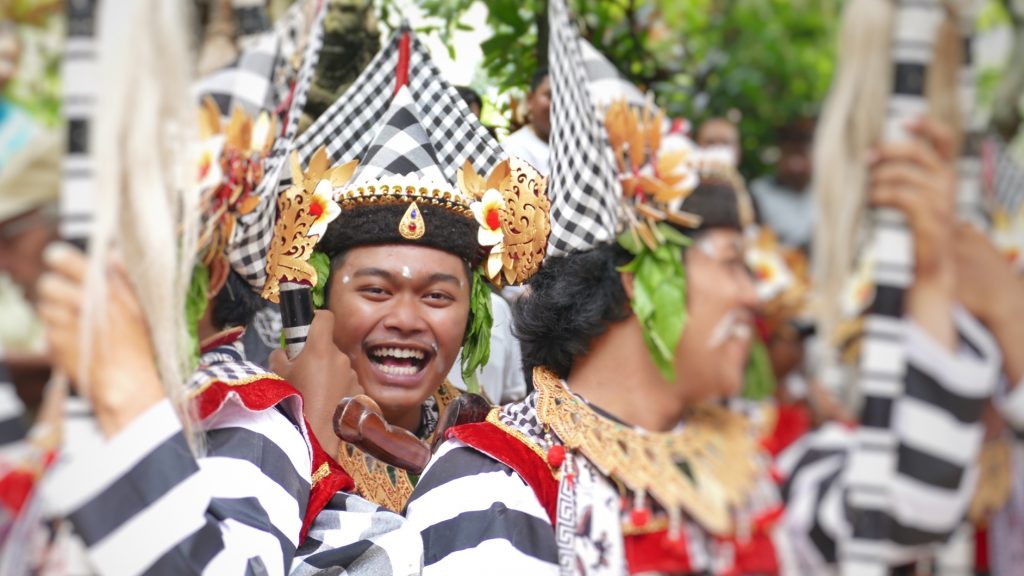 A ngaben – literally translated as ‘turn to ash’ – is perhaps the most unique ritual in the unique form of animism-influenced Hinduism followed by the deeply spiritual Balinese, who believe that life, and death, are transitions. Even more elaborate is the pelebon –  the cremation ceremony reserved for members of the royal family. 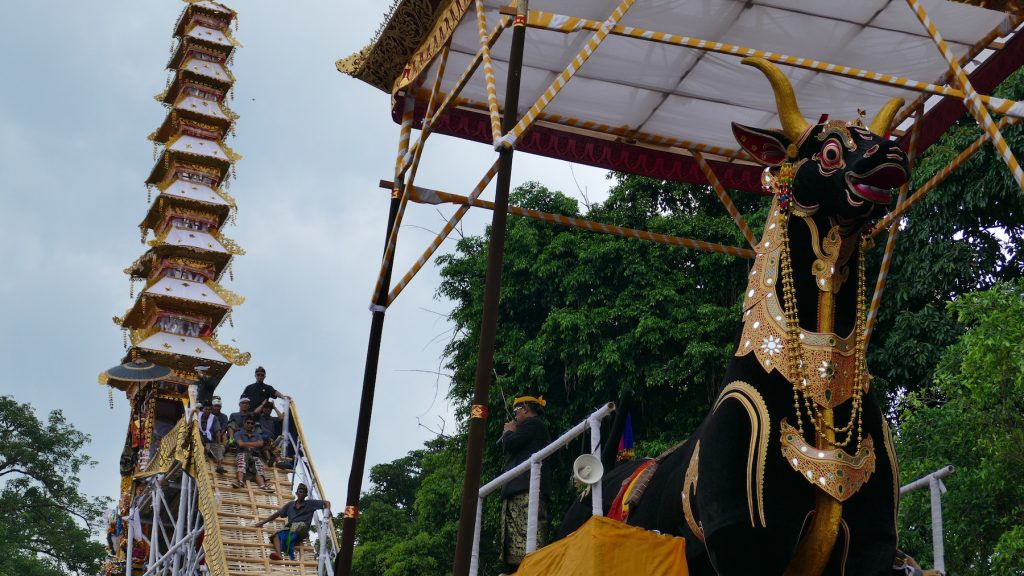 For the preceding three weeks, visitors would have seen intense activity outside Ubud Palace as the community gathered to construct the two enormous structures that are the core of the ceremony: the Bade, an intricately decorated, gravity-defying multi-level tower in which the body is placed and carried from the Palace to the Pura Dalem Puri, and the Lembu, a magnificent black velvet bull sarcophagus, to which the body will be placed for cremation.

On the day itself Ubud came to a standstill as thousands lined the 1km route hours in advance. (Overhead electricity cables had already been relocated to clear the way from the palace to the Pura Dalem Puri.) Dressed in sarong and kebaya as custom and respect dictates, I staked out a spot and chatted to the men from Kutu awaiting their turn to carry the Bade – an honour shared by hundreds of men from surrounding villages in an intricately organised relay system. A fire truck inched along spraying the road and cooling excited spectators. The air of anticipation was palpable – far more Mardi Gras than mourning. 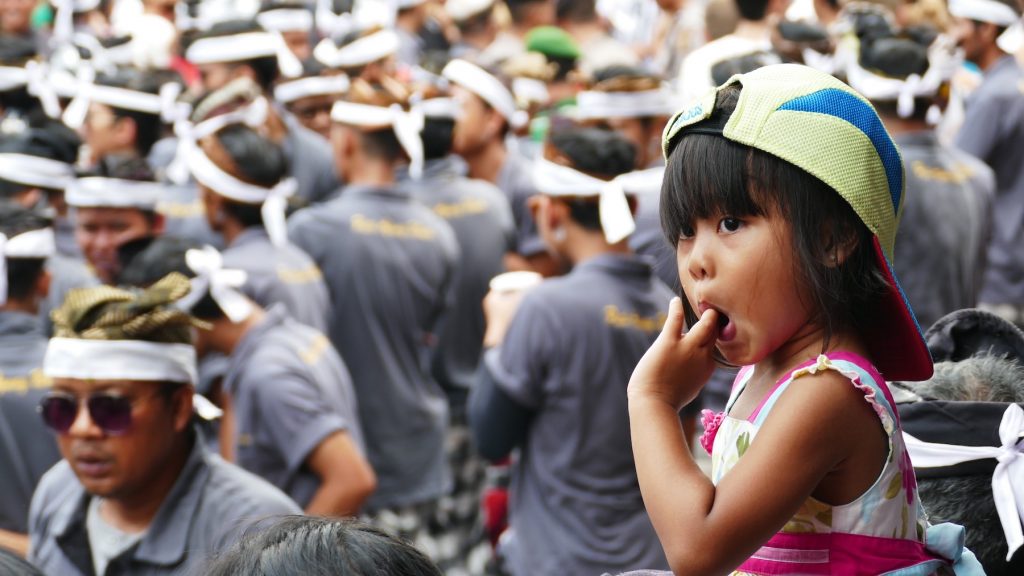 Suddenly a cheer rippled through the crowd like a Mexican wave as the procession started from the palace – royalty, retainers, family friends in colourful traditional dress carrying elaborate offerings; two girls borne high on thrones like carnival queens; gamelan musicians setting the beat with huge drums and gongs swinging from bamboo frames. Charging behind them came the 7.5-metre Lembu borne on a platform of interlinking bamboo poles shouldered by men straining under its weight and manoeuvring it with surprising agility.

Then a roar erupted as the Bade came into sight – at 25 metres said to be Bali’s tallest, and towering over the rooftops – so heavy that the men had to resort to pushing it in place of carrying it on their shoulders. From the base the Tjokorda waved to the ecstatic crowd as, high above, the Pedanda (high priest) protected the body. It was a sight to behold. 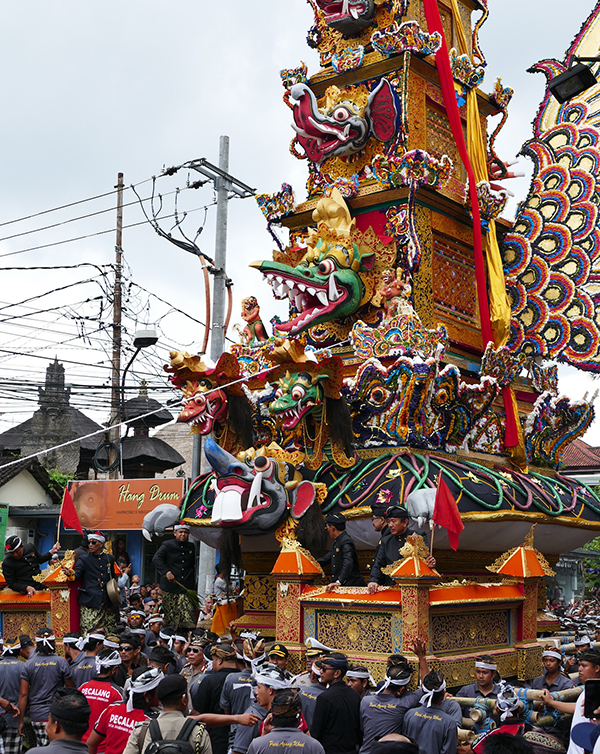 I joined the throng following the Bade to the packed temple grounds, and marvelled as the Bade was lined up with the ramp so the casket could be carried down and the body placed in the Lembu, already manoeuvred into place with extraordinary agility. While the royal family made their final blessings and offerings, sarong sellers weaved through the waiting crowd and drones whirred overhead.  The palace gamelan musicians increased their hypnotic tempo and exotically plumed men performed a traditional dance. At last, the bull was set on fire and engulfed in flames before a blaze of raised iPhones and cameras. Later the ashes would be collected and brought to the sea for the final purification and release of the soul.

What a send-off for the Queen Mother! It was an honour to witness the entire community helping their queen move on from her previous life with such respect and devotion. 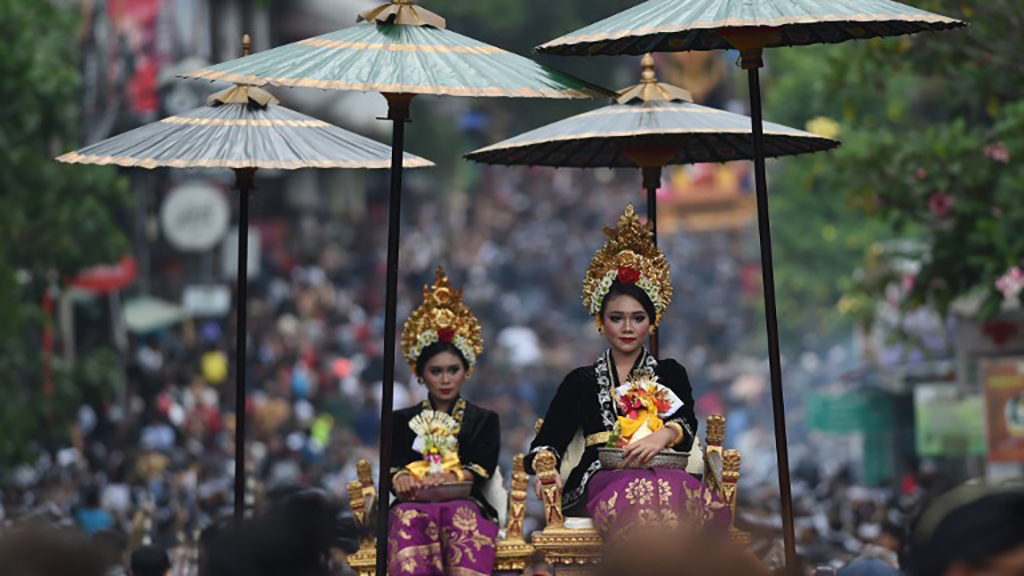 Two Balinese women wear traditional outfits during the cremation ceremony of a member of the royal family in Ubud, on Bali island on March 2, 2018. Balinese Hindus believe cremation is intended to return bodies to the fundamental elements of fire, air, water, earth and void. / AFP PHOTO / SONNY TUMBELAKA

Ubud is a cultural hub of Bali, with a royal village at the confluence of two rivers on the southern edge of the heartland. It is home to one of Bali’s royal families who actively support the arts, creating a thriving art scene.  Create the perfect trip in Ubud while staying in a luxury villa where comfort, privacy and excellent hospitality awaits.