Between Phuket Island and Krabi on Thailand’s mainland is a remarkable 400-square kilometre inlet known as Phang Nga Bay. Named after the indigenous people (pangan) of the Malay Peninsula and its surrounding islands, the province of Phang Nga is rich with stories of pirates, sea-gypsies and Malay fisherman dating back hundreds of years. Many people of Phang Nga still maintain the humble, traditional way of life of their forefathers, pulling fresh lobsters from the sea to sell in Phuket, whilst others have embraced the area’s growing tourist trade and now work as guides.

While Phang Nga Bay is rich in folklore, it is most widely famed for the hauntingly beautiful limestone karsts that jut out of the sea, many resembling unfinished clay vessels upon a potter’s wheel. These colourful islets with their toupees of lush tropical vegetation were carved out over millions of years, and now host some of the world’s most spectacular sea caves, along with Thailand’s largest mangrove reserve.

The unbelievably emerald-green waters of Phang Nga Bay are a delight to explore in a traditional long-tailed fishing boat, canoe, kayak or speedboat. Here are some of our personal favourites for when it comes time to plan your visit to this natural wonderland. 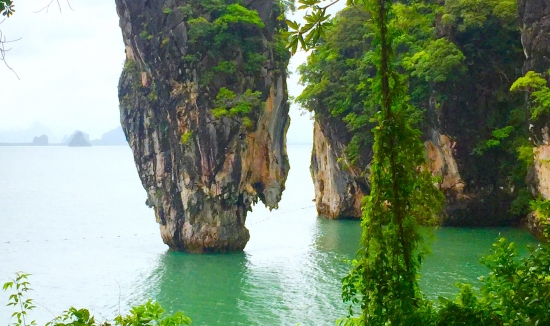 Featured in the James Bond films, The Man with the Golden Gun (1974) and Tomorrow Never Dies (1997), the sight commonly referred to as ‘James Bond Island’ is also called Koh Tapu.

Here one can pace the twenty steps made famous by the suspenseful duel scene starring Roger Moore, or venture along a shaded path past an enormous limestone fissure to a smoothed-out sea cave that opens to breath-taking views of the Andaman Sea. Two small beaches line its shores and offer a great place to burrow in the golden sands while oohing over the marvellous scenery.

Many tour operators provide the opportunity to explore the countless limestone caves and hongs (rooms) of Phang Nga Bay. The best way to witness these extraordinary natural wonders is by canoe, where local guides leisurely paddle one into vast cave systems littered with stalagmites and stalactites. These skeletons, created by a build-up of calcium carbonate, are visually stunning, especially when contrasted with the lush tropical backdrops that glow during the day.

END_OF_DOCUMENT_TOKEN_TO_BE_REPLACED 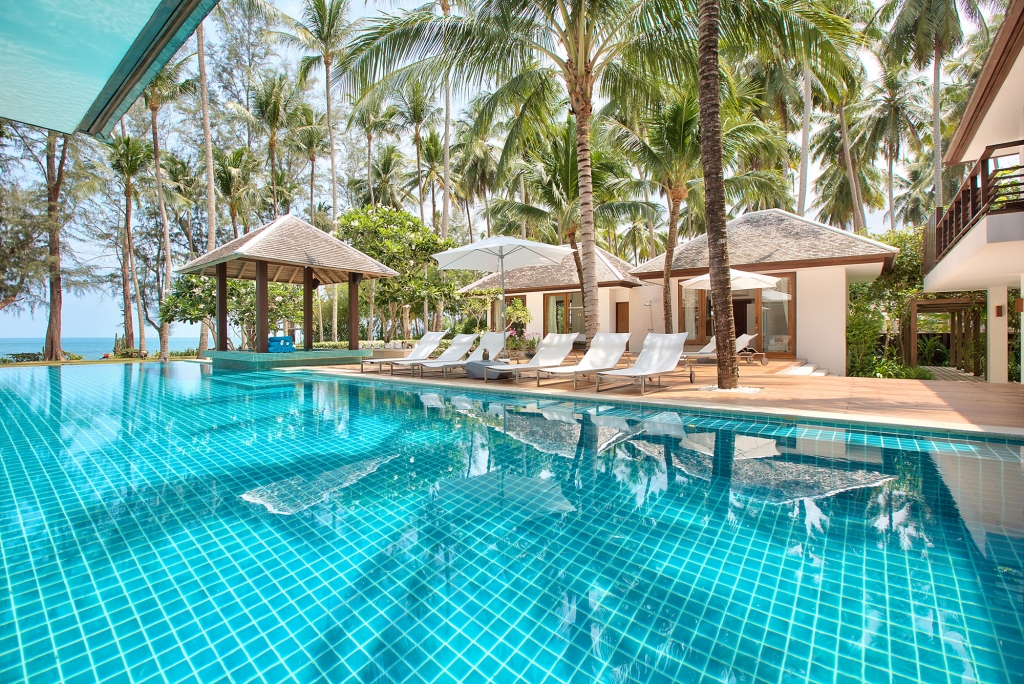 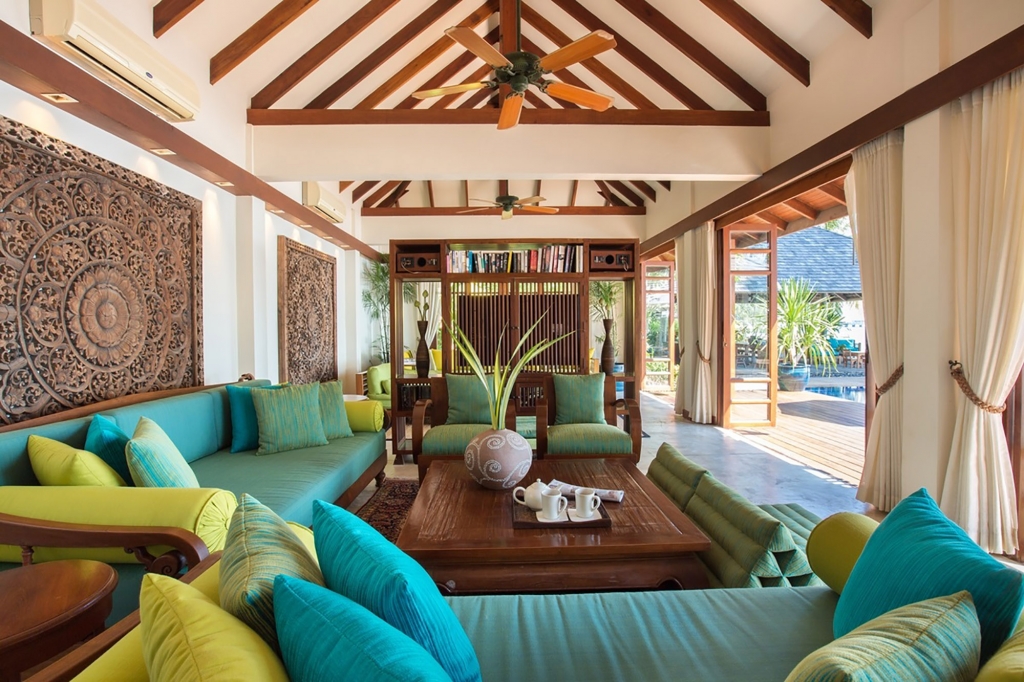 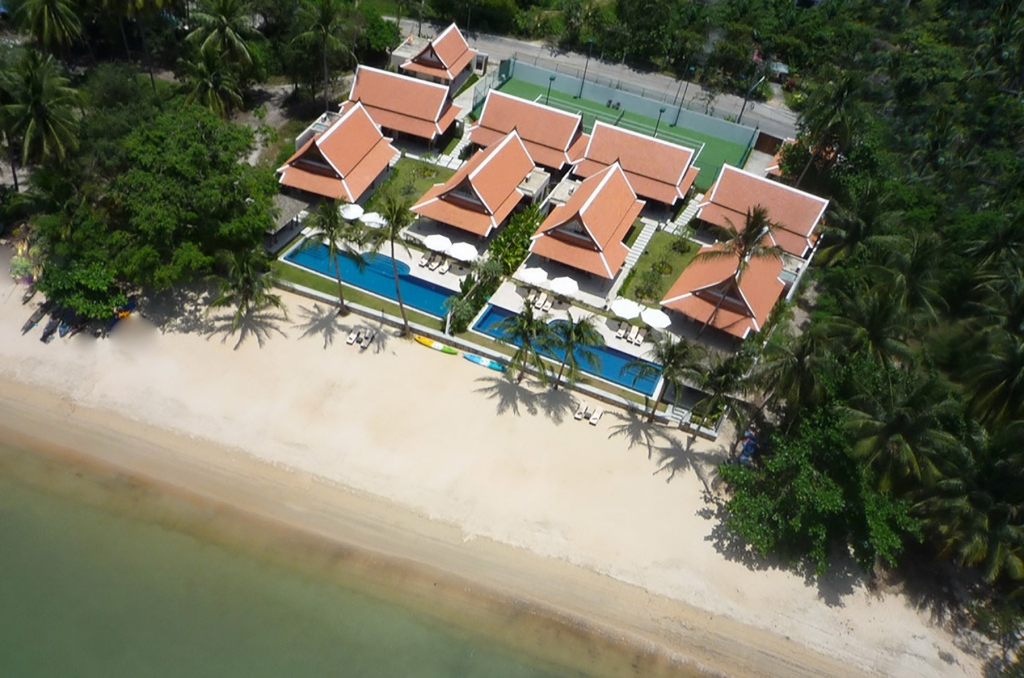 These villas come brimming with facilities, fitted out and fully-staffed. They are perfect for family or group holidays and a supreme choice for weddings among Koh Samui event venues. The in-villa pampering is beyond compare and the outdoor activities are endless. Booking with Elite Havens ensures five-star service from the moment you enquire.

On-site at every holiday home is a team of hosts including a private chef and villa manager handling much more than the cooking and cleaning. Working alongside them to ensure hospitality of the highest standard is Elite Havens’ local Koh Samui branch, which opened in September 2017 and is Elite Havens second Thailand office. Elite Havens also has an office in Phuket and represents over 40 of the very best villas from Natai Beach to Cape Yamu.

END_OF_DOCUMENT_TOKEN_TO_BE_REPLACED

Ready for an adventure? Take to the sea Herman Melville style and visit the Phi Phi Islands to the southeast of Phuket. This beautiful bundle of isles in the Andaman Sea offers some of the most spectacular scenery in the world. Add these must-see islands to your Thailand itinerary.

Early birds get the worm, or in this case stunning views of Maya Bay featured in the Hollywood blockbuster, The Beach, starring Leonardo Dicaprio. A private chartered speedboat departing at sunrise from Royal Phuket Marina near Cape Yamu offers the best chance to witness this remarkable site before the hoards arrive.

The approach to Koh Phi Phi Leh is an experience in itself, as the 100-metre-high limestone cliffs encompassing unbelievably azure water come into view. Silhouetted by dense jungle, the two silky-soft white-sand beaches of Maya Bay are gradually warmed by the rising sun with the allure of lazy lounging. But wait, there’s more.

Snorkelers rejoice! This remarkable bay with depths of two to three metres is teeming with marine life in its northern section where coral reefs are more prevalent. Leap from the deck of your private charter boat or dare the 150-metre swim from the beach. Either way, be prepared to see large boulders laden with enormous sea anemones, parrotfish and photogenic giant clams posing with mouths agape.

Before departing to the next destination, venture barefoot into the jungle along a short trail shaded by a lush tropical canopy to a wooden staircase and terrace overlooking Loh Sama, reputed for its snorkelling and diving opportunities. Here you’ll see a picturesque tiny islet surrounded by crystal clear waters with traditional long-tail wooden boats moored alongside.

Opposite Maya Bay on the eastern edge of Koh Phi Phi Leh is the unbelievably green Phi Leh Lagoon. Stretching nearly 600-metres, this stunning natural wonder twists and turns down a canyon-like waterway ending in a wide picturesque lagoon with vertical limestone cliffs on all sides. Its full beauty is unveiled around midday, when the sun, like a brush to canvas, brings to life its colours, tones and textures. This is a spot to linger awhile and appreciate how nature’s artistic hand can create such a glorious site.

If it weren’t for the ripples, you could be forgiven for thinking you were diving into a putting green on a world-class golf course.

END_OF_DOCUMENT_TOKEN_TO_BE_REPLACED

“Trust me, it’s paradise. This is where the hungry come to feed. For mine is a generation that circles the globe and searches for something we haven’t tried before. So never refuse an invitation, never resist the unfamiliar, never fail to be polite and never outstay the welcome. Just keep your mind open and suck in the experience.”

In 2000 Danny Boyle’s “The Beach” was released on the big screen and it was the first time I had ever seen the beauty of Thailand. The crystal-clear water, white sandy beaches with palm trees, the hedonistic lifestyle – it was where I wanted to be. In 2007 the dream came true. I moved to Phuket.

At first, it seemed like the perfect island, having an array of beautiful beaches and an exciting and sometimes crazy nightlife. For the first six months, I explored Phuket from east coast to west coast, from north to south and found it to be one of the most beautiful places in the world.

Yet it wasn’t until I took my first trip out on a traditional Thai Long Tail boat that I realized Phuket is one of the many beautiful islands within Phang Nga Bay.

Phuket is the gateway to over 100 islands, each one easily accessible by boat and offering something different, from perfect dive and snorkeling sites, long white sandy beaches for chilled-out lazing around, and some with shacks that serve fresh tasty local food. It was after my first trip out, that my eyes opened up to the place I now call home, and how beautiful it is. That’s when island-hopping around Phang Nga Bay became my passion.

Each of the islands within Phang Nga Bay has its own uniqueness. There are the distinctive features of limestone formations that rise out of the emerald waters, the best example being Koh Ta-Pu (Nail Island) known to you and me as James Bond Island. One of the most famous islands in Phang Nga Bay, having been used as the backdrop for the 1974 James Bond film “The Man with the Golden Gun”, now due to its popularly, it is also one of the busiest islands.

I have two young children,

END_OF_DOCUMENT_TOKEN_TO_BE_REPLACED

Phuket has long attracted travellers seeking a tropical beach escape, but as Thailand’s largest island with a rich history, dining and marine scene, there’s much more to see and do beyond lazing on the sands. From vibrant nightlife to spectacular seascapes to beautifully restored Old Town streets, an island holiday on Phuket can unwind in some delightfully surprising ways.

But first, the beaches.

Kamala Beach, on the central west coast, is one of Phuket’s quintessential postcard-picture beaches, its soft sands and shallow waters are among the island’s best places for all ages to swim, surf and sunbathe. Hints of its fishing village past remain with traditional long-tail boats gliding across the calm bay, while a string of casual restaurants lining the sands offer seafood barbecues and breezy spots for watching the sun go down.

The smaller Surin Beach is another fine sunset spot, with its beach clubs and seafront restaurants serving up creative cocktails along with the sea views. Hemmed in by two lush headlands, Surin’s fine sands and swaying palm trees add a tropical idyll that invites you to linger, whether indulging in the beach club scene or not. Nearby Laem Singh is a small cove found between Kamala and Surin reached via a steep path, where silken sands and colourful snorkelling sites await.

With its position along an ancient Andaman Sea trading route, Phuket has attracted seafarers for centuries, though these days superyachts and cruise vessels are more likely to be spotted on the horizon than merchant ships. Whether you get there by private yacht charter, or by kayak for venturing deeper into its hidden caves and lagoons, no visit to Phuket is complete without exploring the magnificent Phang Nga Bay with its tall limestone karst islands.

The Similan Island archipelago west of Phuket is a protected marine wonderland for divers and snorkellers, while Racha and Coral Islands are an easy day-trip from Phuket, brimming with sea life for snorkelling and white-sand beaches for relaxing.

Phuket’s interior is looking more urban these days, but discovering its traditional rural side and jungly bits is simply a matter of straying off the island’s main roads. Walk a path through towering bamboo and giant leafy tropical plants of the protected Khao Phra Thaew National Park up to Bang Pae waterfall, or cool down in the stream.